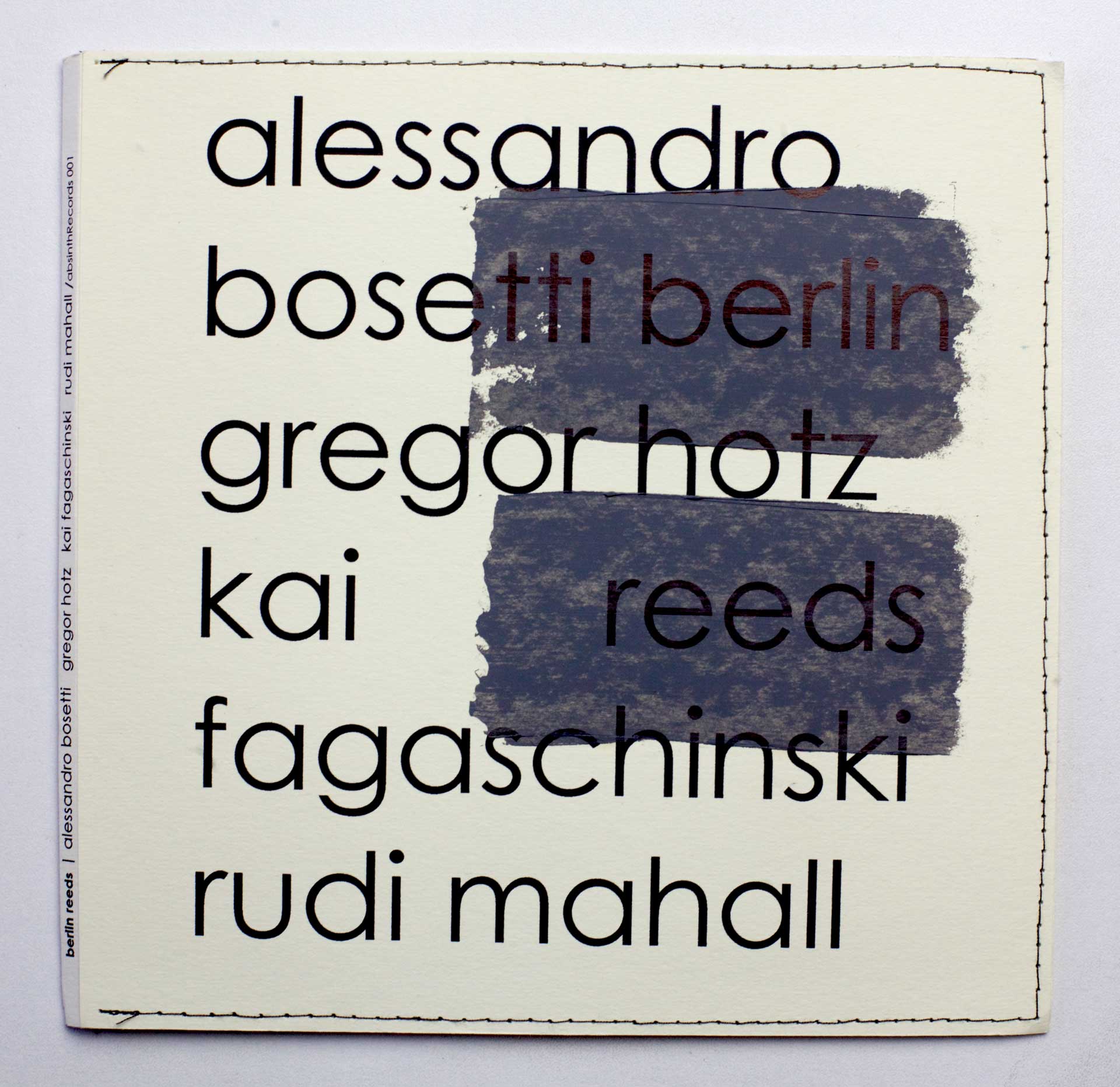 Berlin Reeds features solo performances by four different improvisers; each takes a radically different approach to solo performance, though the reductionist/improv scene in Berlin is home ground for three of these players. Appropriately, rather than squashing these pieces into a single ill-assorted CD compilation, Absinth has chosen to present them, bento-box-style, as four minidisks arrayed inside a small hand-sewn album.

Alessandro Bosetti’s 18-minute piece for soprano saxophone and feedback is entitled, a little dauntingly, « Unplayed Saxophone. » Apparently something of a sonic notebook, assembled from cassette recordings over November and December of 2002, it nonetheless runs continuously. Though there’s indeed no « playing, » in the sense of actual articulated notes, it’s still a very busy and eventful piece: tumultuous ructions yield to an unnervingly prolonged whistle (the aural equivalent of a staring contest with the listener); there are passages suggesting everything from underground tunnels to rodents. On « Friendly Fire » Gregor Hotz reduces his palette down to single, vastly sustained notes on his bass saxophone manipulated through multiphonics. The pace is meditative, each foray on the horn complemented by silences sometimes lasting as long as half a minute. Rather than austere, the results are wonderfully immersive, catching the listener up in the shifting layers of burring, clashing overtones. Clarinetist Kai Fagaschinski’s « I’m afraid of americans too » contains two widely separated split-tone passages and a brief, earsplitting episode recalling Evan Parker’s high-register eviscerations on his 1975 disc Saxophone Solos; the rest of the piece is situated on the verge of inaudibility, a study in barely-there hisses, fizzes and other white noise. A four-minute appendix of tiny crackles and crinkles, « no body can leave its skin, » gets even closer to zero degrees Kelvin (I’ve heard people unwrapping candy in the audience at concerts who were louder).

Bass clarinetist Rudi Mahall is the wild card on the set, a more orthodox free jazz improviser (he can be heard to excellent effect on a number of Aki Takase’s albums). On his three short solos here, he skitters around the high registers of his instrument with uncanny control, swinging deftly, then pounces on a low note, honking like a goose or squatting on it like a toad. What Mahall’s does with multiphonics is in some ways the flip side of Hotz’s rarefied experimentalism, just as Fagaschinski’s probings of silence and white noise are a logical complement to Bosetti, who brings those same sounds into disturbing close-up by means of amplification.

For all its rigors, Berlin Reeds is curiously addictive: it’s hard to stop popping those little discs in the player once you’ve started. It’s highly recommended to followers of cutting developments in improvised music, who will need to swoop in while it’s still around (it’s produced in an edition of 200 copies). A follow-up volume, Berlin Strings, is promised for later this year.

Packaged in 8″ square gatefold sleeve which is sewn together.
Hand numbered edition of 200 copies. 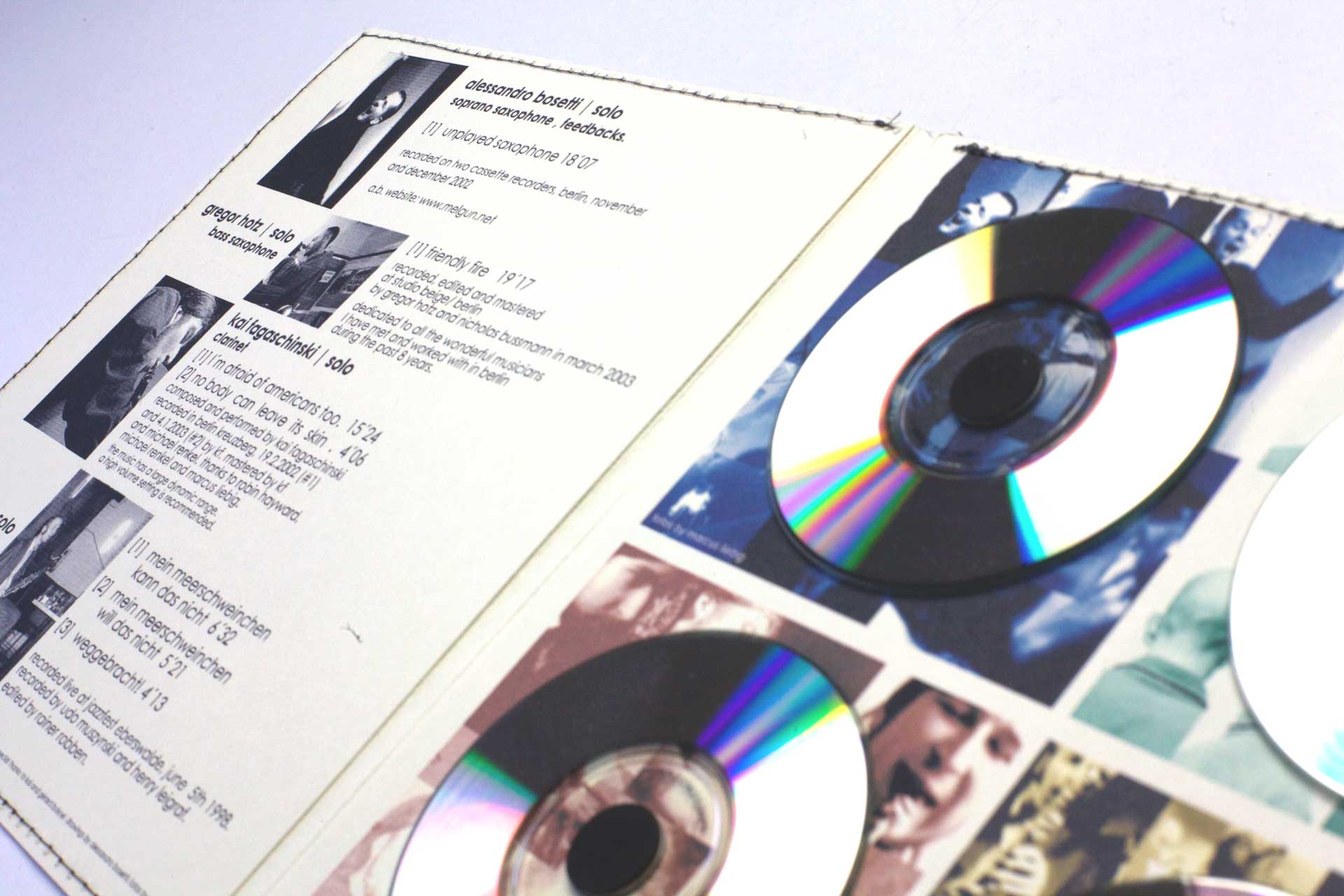