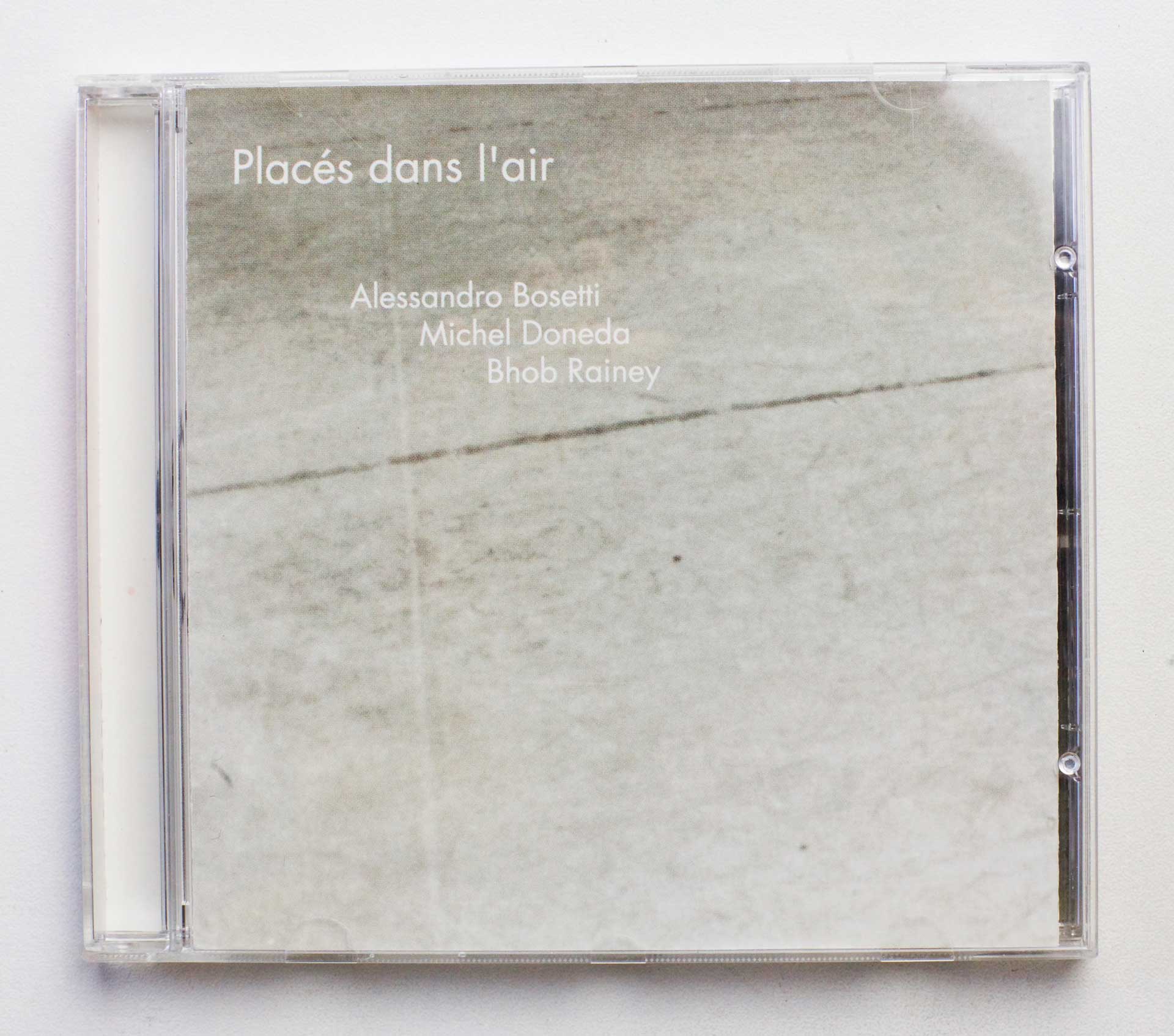 A long continuous work from this trio of soprano saxophonist, free improvisation using extended techniques and unusual approaches to the instrument.

« Alessandro Bosetti, Michel Doneda, and Bhob Rhainey work with the most rarefied materials in the most high art of settings on the Placés dans l’air CD (Potlatch), at times indistinguishable from Hautzinger, Dörner and Rives. lronically, or perhaps by design, Placés dans l’air resembles the sound of machinery. Scale and chord studies à la Marcel Mule have been done away with. This barren, unforgiving landscape is not without its beauty, but also without the amenities and conveniences of home.

This manifestation of post tonality, instead of densely packing explosions of possibility, retums compositionally to plainchant; startling enough, but consider mat the trio in large part replaces tone (which in plainchant ain’t all that much in the first place) with inhalations and barely audible squeaks, and further that saxophones sound like the trumpet of Hautzinger, and we have a peek into both the advanced state of appropriation and its place in musical creation.Plainchant exorcises Placés dans l’air of any sudden moves or secular, libidinous sentiment. The saxophones are brought to edge of their designed abilities at a deliberate, plodding pace. Effete and lofty, yet dilute and dynamics-free, the music demands a fetishist’s love of the saxophone and fascination with the tiny and subtle. The drama is visible to anyone willing to endure expanses of silence and inaction while looking througb the microscope to see it all unfold. Long, drawn out, carefully sounded harmonics induce visions of those Tibetan prayer bowls mystically appointed liberals adore. Despite the misty, airy nature, one is always reminded of mechanization. Anticipation of an album with lots of whistling and lisping, harmonics and nontonal blowery couched in dramatic silences does not go unfulfilled.As a work it is more a symptom of the larger capitalist dehumanization process at work, among which there are nevertheless resident syntax and avenues of idiomatic invention.

As with the move from great analog video equipment to primitive digital equipment, Bosetti et al. are dealing with a new technology, a new aesthetic, a new engine, a new way of doing things. The centrality of these sounds are unique to these times – or certainly the acceptance and incorporation of them is new – as they are the stuff that hom players used to practice away from, that which used to be synony-mous with necessitaûng a second take. Bosetti, Doneda and Rhainey do not have extra tendons in their embouchures that Bechet or Coltrane didn’t. Instead, the world, how and to whom its riches have been allocated, its declining ecology, and what has passed beneath the musical bridge up to this point are what influence the creation of these sounds in this way and this stratagem of doing things. »-Stanley Zappa, Bananafish

Recorded at Les Entre-peaux, Toulouse, on May 26th, 2002.
Note to the listener: The music on this CD is one continuous piece. Track indexes have been added for your convenience.
Thanks: La Flibuste, Adre Lary Vocoobs, C.C.A.M., Le Clou, Théâtre² l’Acte, Lê Quan Ninh, René Louisor-Marchini. 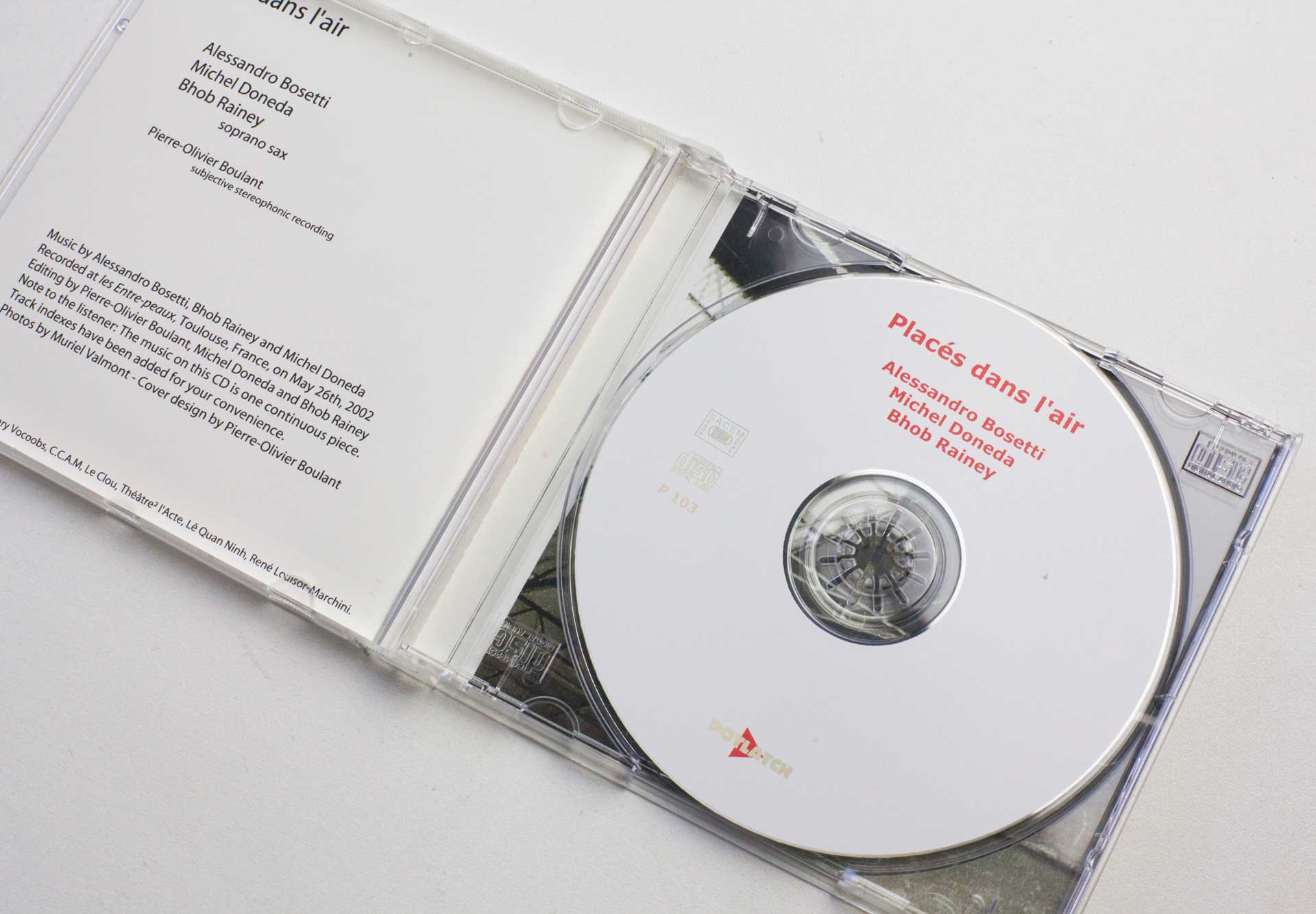