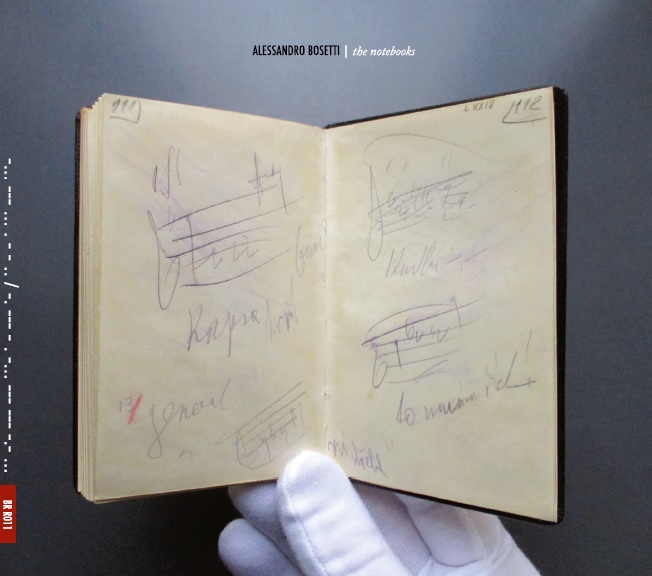 Leoš Janáček used to scribble notes and record the speech melodies that he heard everywhere around him.
He did not care much about the possibilities enabled by the discovery of the mechanical recording technology of Edison or Bell, but preferred to write by hand for later use. The last element is a hypothesis because we could also assume that he used to scribble in order to get the melodies out of his head and enclose them in a sealed form that will not come back from beyond the grave to further haunt him.
Bosetti instead of trying to find melodies from notebooks in Janáček’s compositions he set out to perform a bodily experience of re-synchronization with the sounds long gone, and noted with the use of deficient but personal technology. The rhythm gets redoubled and the eerie effect of a personality split is re-performed. The bold decision to get himself infected with all the pain of the process of building of personality of Czech composer brought Bosetti to a point where he himself just like Schwitters recites the meaningful (or meaningless) fragments of another reality.

“The Notebooks” was originally commissioned for the stage by the Janáček Opera Festival 2014 and premiered in the Villa Tugendhat in Brno on November 25th, 2014.
The radiophonic version of “The Notebooks” included in this edition was comissioned by Czech National Radio – Český rozhlas for the Radiocustica series, premoiered on February 27, 2015 and was awarded the Palma Ars Acustica preis in 2015.
Special thanks to Pavel Lojda at Janáček Opera House, Ladislav Železný at Český rozhlas, Jiří Zahrádka and everybody else assisting me at the Leoš Janáček Memorial archive in Brno, Gerard Lebik and Zuzanna Fogtt of Sanatorium Dźwięku. Also special thanks to Jaroslav Šťastný, Jozef Cseres, Michał Libera and Daniel Muzyczuk.
“Dante and Beatrice -The Notebooks, part 2” was created for The Fall of Recording project curated for Sanatorium Dźwięku festival by Michał Libera and Daniel Muzyczuk. It was produced by In Situ Foundation within the framework of Sanatorium Dźwięku residencies held in Sokołowsko.

The program of Sanatorium Dźwięku has been arranged in such a way that it develops in multiple layers, oscillating around a number of key ideas, including inquiries in the areas of musical notation, the relationship between composition and improvisation, the use of the spatial potential and the perception of sonic space. Festival activities include concerts, installations, lectures, panel discussions and presentations.