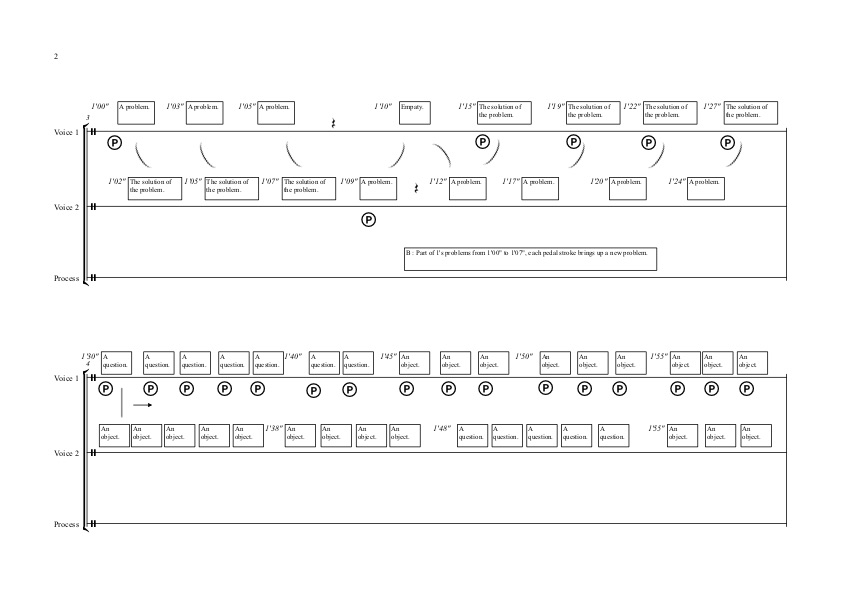 0 X 2 is a conversation between two persons.
The two persons are sitting at a table facing the audience. Each one has a microphone and will be amplified (left- right).

The piece can be performed by anyone willing to precisley respect the instructions and the timeline given in the score.

Boxed instructions are valid until the next one comes unless a rest is marked.

Content is free although it should be faithful to the given instructions. It is extremely important for it to be different at each new performance of the piece.

Content should not be utilized twice, not even from rehearsals, and this applies to general topics as well as single phrases and fragments.

The piece should be approached with a mind sharp and empty at once. It will be very different each time.

All instruction should be fulfilled “in the conversation” and not with the aid of external actions.

A vertical line between two boxes indicates superposition : the two voices speak at once.

Two vertical lines between two boxes indicate interpolation : the two voices speak at once trying to make room for each other but not necessarily taking into consideration what the other voice is saying.

Curved lines between boxes on same or different staves indicate logical continuation of the narrative.
(between a question and an answer for example).

Without such curved lines a non sequitur is also acceptable between boxes.

Care should be put into balancing sound level and quality between amplified voices and live processing.
As sound processing is mostly constituted by voice fragments there should be a sense of ambiguity between which voice is “live” and which is “processed”.