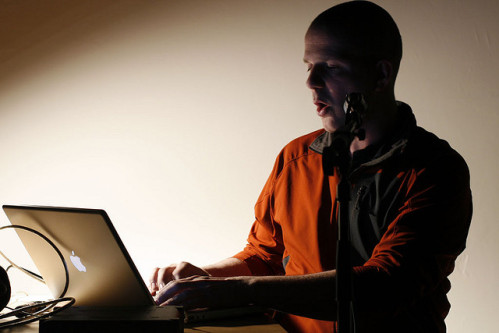 Trying to count as long a spossible in french while a text – sound score tries in every way to disturb and interrupt. A sound meditation on “number blindness”. Live performance from the studios of RTBF in Bruxelles for Art’s birthday 2010.

Awarded the Prix Phonurgia Nova in 2021.

Etienne Noiseau, on Syntone, on the occasion of the awarding of the 2021 Phonurgia Nova award to 636 : « … Alone in the studio, Bosetti counts slowly, from 0 to the number he will reach once the time has elapsed. He wears headphones over his ears, in which he self-inflicts listening to disturbing elements, including his own pre-recorded voice. We also hear him, and it is this voice that explains the principle of the device, as well as the underlying reason for the experiment (the author’s difficulties in memorizing numbers since his early childhood, despite his father’s obstinacy in instilling math in him). Like the real Bosetti, we are thus trapped by the device and condemned to an unbearable suspense: will he succeed in the challenge of counting without making a mistake until the end of the allotted time? It’s hilarious, irritating, and at the same time extremely clever.
First of all because the device plays with live and recording, which are two fundamentally ambivalent modes of enunciation specific to radio. The live voice, the one we are tempted to identify with spontaneously, is paradoxically the one that is not addressed to us. As for the voice that speaks to us, that informs us, that takes us as a witness and that demands our attention, it is however less « authentic » than the other (because it is pre-recorded), at the same time as it is the disturbing element that, if we identify with the first, we too try to ignore. In addition to being a tribute to the creative potential of radio in its simplest form, this prize also rewards, in my opinion, the audacity of the sponsoring organization, in this case the RTBF, for having given carte blanche to an artist for a live creation (even if calling on Alessandro Bosetti, who is not a beginner, is a relative risk).
Moreover, this piece is also fascinating in that it brings into play the question of the radio work. Indeed, we listened to the recording of a live creation. What are we judging? The live creation or the recording? Once recorded, and titled (which is of considerable importance, because 636, the title given afterwards, gives us the outcome of the piece right from the start), what do we do with its flaws and weaknesses? With its length and its unsurprising end, can it deserve the title of grand prize in the face of creations fashioned in the studio, whose construction is mastered from start to finish? I believe so, because 636 is an exemplary illustration of the very essence of radio art, which must be fundamentally promoted. Viva Alessandro, viva la radio! »

Produced by André Defossez for RTBF/musiq’3, on the occasion of Art’s Birthday Party, January 17, 2010.