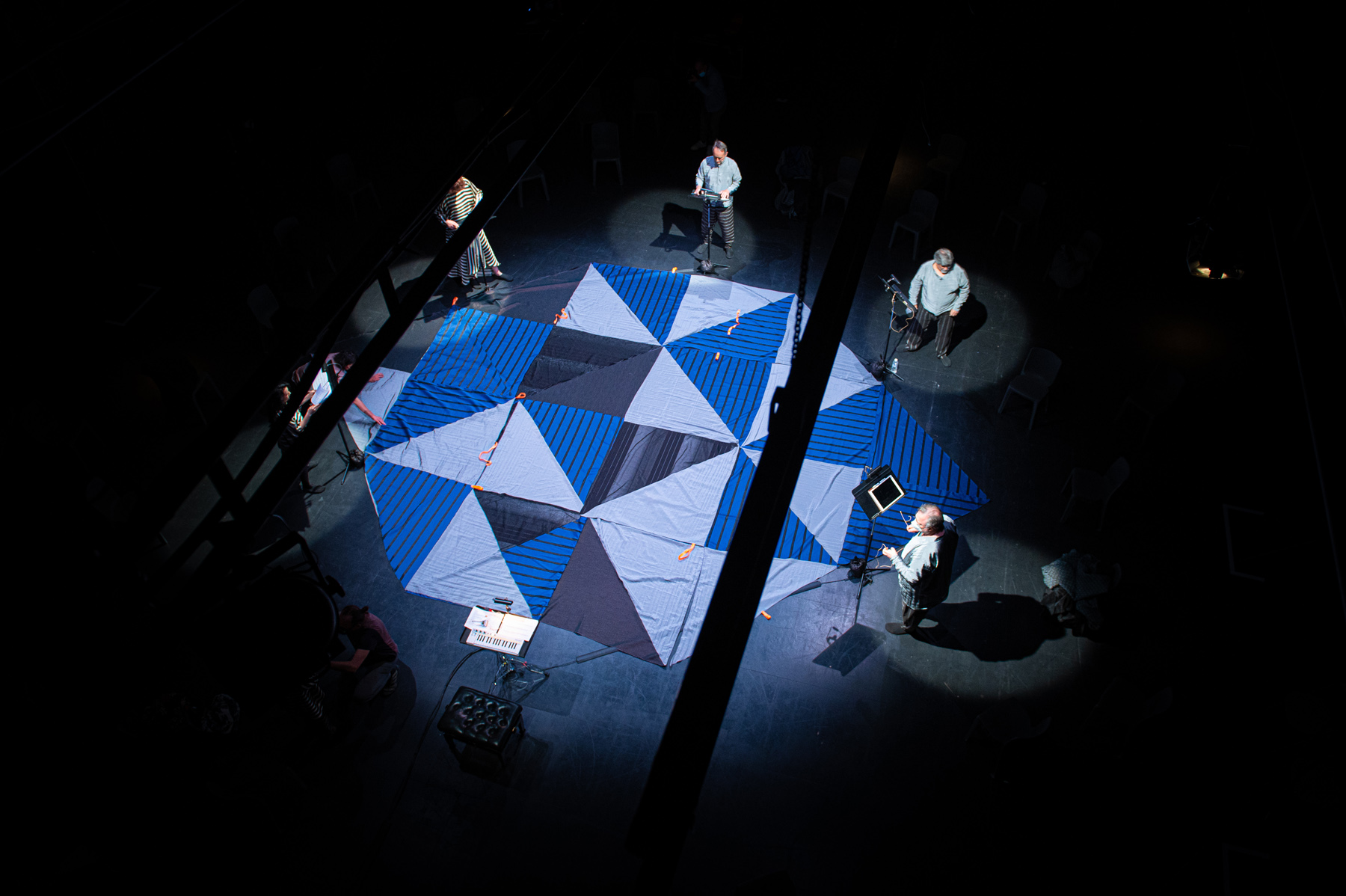 – What do you want from me ?
– I’d like to make a portrait of your voice.
– It’s my portrait then ?
– No. I think that you and your voice are not the same thing.

Alessandro Bosetti with Neue Vocalsolisten and costume designer Canedicoda in a music theatre piece portraying a family of incorporeal voices.
A production GMEM-cncm-Marseille, co-produced by Neue Vocalsolisten, Nouveau Theatre de Montreuil, La Soufflerie and Deutschlandfunk Kultur.
Alessandro Bosetti, sound artist and composer, paints a series of portraits from a collection of conversations recorded in Italy during one summer. He has chosen and collected six voices articulated over three generations, three female and three male.
He then disassembled them and put them together in a palimpsest that integrates three elements: a polyphonic writing – collage of thousands of fragments and vocal writing for a portraitist – an electroacoustic writing and an immersive scenic writing.

A family of voices lives its sonic life. A tangle of sounds and affections suspended between Renaissance polyphony and family din. Voices have no body, at least here, each one is mother, father, daughter and sister of one or the other.
At the beginning of the show, the portraitist, seated in the middle of the audience and the five singers, familiarizes the audience with each of the voices. We start from a simple and intimate situation, which thickens and densifies.
The family is in turn dismantled and reunited.
Real dramas are unleashed between the voices: bonds, separations, friendships and love…
A cloud of voices, charged like a storm, brings to life for the audience all the immersive emotions of an imaginary and magical community.
The portraitist shares this choral narrative with the audience, who find themselves immersed in a very tight crowd, both claustrophobic and nourishing, just like every family.
The family of voices is torn between a rigid division of roles and its proliferating abstract and fragmented phonetic ration.
In the background, lurking in the half-light, the identities of the six anonymous models tell each other, speak for themselves, of a country loved and hated, in a daily language imbued with the present.
Here, bodily, physical and political identities count for little.
Only the voices count, which, as markers of absolute generality, resemble souls to whom an identity has not yet been attributed.

A scene on which the audience, itself encircled by loudspeakers, encircles the singers and the portraitist.
The audience is seated on a spiral shape (the singers are placed within the audience at first).
The light explores the anonymity of the voice through radical contrasts between moments of almost absolute darkness (ambiguity
between recorded voices and live voices) and other moment with full room light ( ambiguity between the voices of the performers
and those of the audience, who is singing ?).
Costumes (Canedicoda / Giovanni Donadini)

1) A tight polyphonic writing for a 5 pieces vocal ensemble, seated within the audience and present from the beginning to the
end of the piece. The audience is caught in a tangled and enveloping polyphonic texture, whose vibrations are experienced physi-
cally due to the closeness of the singers.
2) A collage of thousands of voice fragments taken from the original recorded documents and emitted by the loudspeakers. A com-
posite landscape of vocal materials and an alternatively monumental and subtle proliferation of phonemes which is sonic texture
and radio-collage at once.
3) A score for a portraitist. The one who guides the audience through the voice landscapes, at once unfaithful translator, ra-
diophonic host and demiurge of the choral narrative taking shape.
All portraitist and narrative parts can be translated in the local language while the the recomposition of Italian recorded
documents favours phonetic and abstract aspects and is suitable to all audiences.