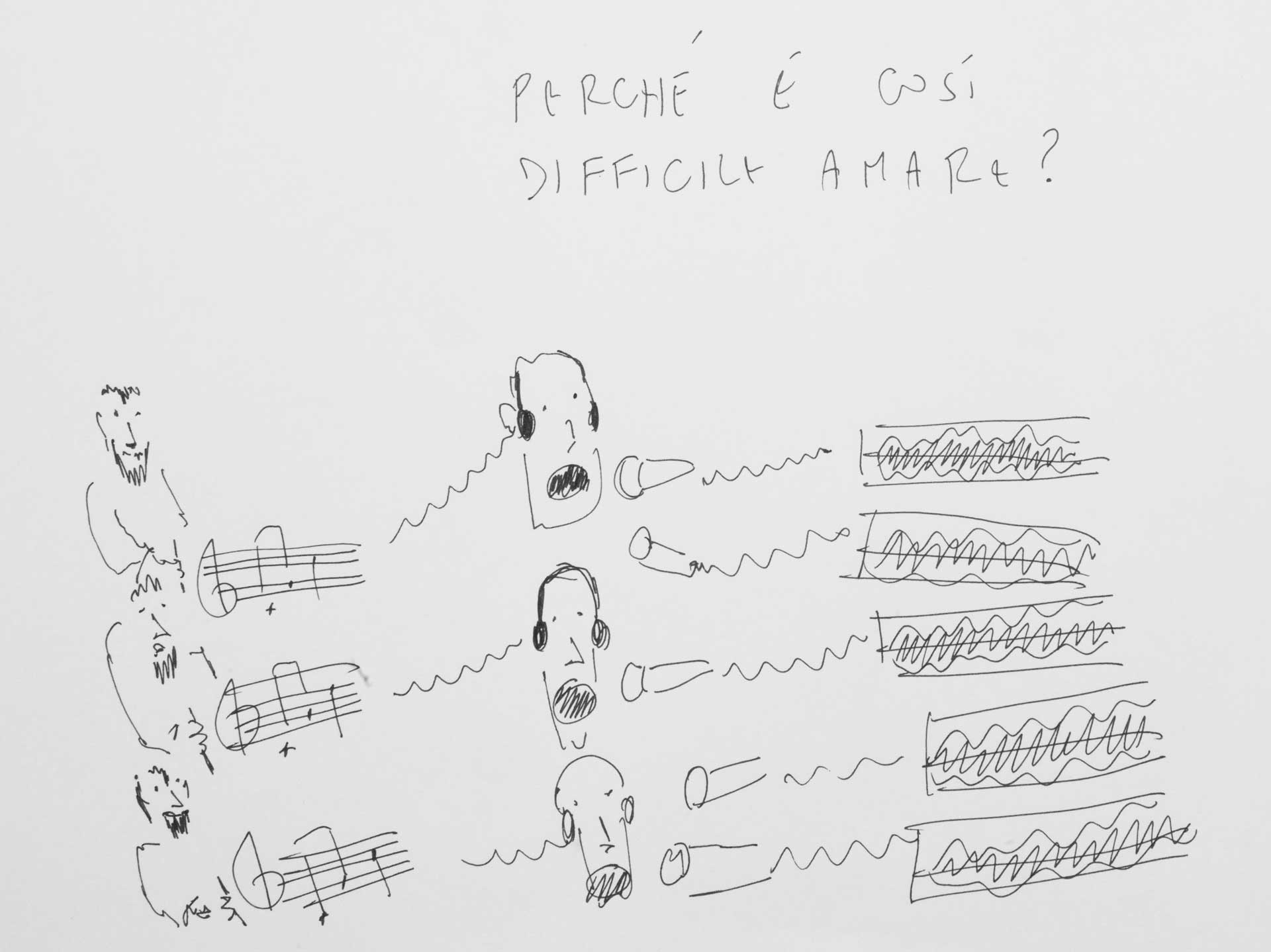 Musical translations originating from the fifth and sixth books of madrigals published by Carlo Gesualdo, Principe di Venosa in 1611. Sung by random people encountered in Napoli where Gesualdo once lived and composed. The meetings happened by chance in streets, cafes, parties, markets and churches in July 2007. All of the singers were people not previously acquainted with the madrigals. Each person was asked to sing along with a recording of one of the individual voices from the original polyphony while listening to it through a pair of headphones. The polyphonies were later reconstructed. Due to the approximate renderings, Gesualdo’s original chromaticism is expanded even further, as microtonal shadings are brought into the mix. A meditation on the practice of screziatura and on the erratic nature of musical pitch under the influence of the stars, locations and human encounters.

The musical translations presented here originate from the fifth and sixth books of madrigals published by Carlo Gesualdo Principe di Venosa in 1611. They have been sung by people I met in Napoli where Gesualdo used to live and compose.  Meetings happened by chance in streets, cafes, parties, markets and churches in July 2007. Each of those persons was previously unaware of those madrigals. They sung along single voices from the original polyphonies I presented to them through a pair of headphones. I then reconstructed the polyphonies with what was given to me. The original cromaticisms in the music widened and frequency proportions bended. Every one of the many off pitch notes mattered. Each omission, each confused muttering was part of this gift.  The whole arrangement process that followed has been meditation and practice on the « screziatura » as well as on the erratic nature of musical pitch under the influence of stars, places and human encounters.

Gesualdo was a notorious murder and pathological sadomasochist but this is, by my personal opinion, of scarce interest here.

He wrote the music he wrote because of he’s refined virtuosity and he’s atypical privilege of being prince and composer at the same time.  Endowed of unlimited means and time by being  he’s one and only Maecenate, Carlo Gesualdo was free to go all the way he’s musical fantasy suggested.

The cultural milieu played a role as well in forging his taste in dissonant intervals – for reference see the madrigals of his mentor Luzzasco Luzzaschi. If not as gracefully as those of his pupil they share all the same adventurousness in harmonic solutions -.

I conceived this piece as a system of local memory.  Notions and emotions could be placed inside the fourteen places of memory that it contains. All those memory places actually exist in Naples. Wandering for long days in the streets of that city it happened to me to think a lot about another excited individual of the same age and city of Gesualdo. Giordano Bruno,  in a visionary prefiguration of modern information science taught he’s peers all over Europe a new art of memory.

He’s conception of memory places and memory  images as magical attributes prompted me to locate fourteen Neapolitan places where I could place each one of  the strange madrigal  translations that were unfolding in my hands.

Each one of the fourteen places or « loci » is placed under the influence of one planet and contains a translation of a Gesualdo’s madrigal. Each madrigal is a talisman, a magical image and an allegorical recitation.  Each place and it’s contained madrigal could be mirrored and revived in your memory, dear listener, as a mnemonic and magical tool.